The international ICDP (International Continental Drilling Program), organized by an international consortium, provides infrastructure for scientific drilling on the Earth’s continents including their lakes and continental shelves.
General objectives are:

Scientist at German Research institutes conduct as PI and/or Co-PIs at 75% of all ICDP campaigns. The Priority program SPP 1006 – ICDP Germany forms the financial base for the realization of drilling around the globe.
Main goals of SPP 1006 are:

1) Coordination and initiation of projects on national level,
2) Support and realization of communication on national and international level (e.g. Posting and support for workshops and science meetings),
3) support for scientist at German research institutes for the preparation and opening of original international Initiatives,
4) Documentation of ongoing national and international ICDP activities with German participants
5) Database for research results of scientist at German institutes and universities

In order to keep our database and information platform up-to-date it is important to inform the ICDP-Germany coordination office with any information related to ICDP: e.g. upcoming workshops, paper published, and even all kind of theses prepared within the framework of ICDP.
Please send us news and postings at icdp@ifg.uni-kiel.de!.

ICDP is an international continental scientific deep drilling program that developed from the German Continental Scientific Drilling Program (Kontinentales Tiefbohrprogramm – KTB).
ICDP was established to test scientific hypothesis and models, which can only be corroborated or revised through drilling of continental crust.

A fundamental rationale of ICDP is, that all parties involved in specific drilling projects cooperate on a scientific and technical basis. Members of the Science Team have free access to drill sites, borehole data and core samples. Continental drilling takes place at geological key sites and is managed by an international Science Team.

Why Scientific Drilling on Continental Crust?

Continental scientific drilling is a remarkable and unique instrument of modern geosciences. It allows us to catch a glimpse of the inaccessible depths of our home planet. Only by drilling scientists can observe actual conditions, changes and ongoing processes in the depth.

Scientific drilling is used when sampled rocks exposed on the Earth’s surface cannot sufficiently explain past geological processes and when geophysical imaging does not sufficiently explain observed phenomena such as volcanic or earthquake activities. Scientific drilling enables us to reconstruct past climate and environmental changes and the functioning of the System Earth with the interconnection of geosphere, biosphere, atmosphere and hydrosphere.

Although great technical advances have been made, the deepest borehole on Earth is the 12,262 m deep hole on the Kola Peninsula, northwestern Russia, drilled from May 1970 to 1989 which represents only about 0,09 % of the total diameter (12.750 km) of our planet! The two deepest boreholes of the German Continental Deep Drilling Program (4000 m and 9101 m) (KTB ) yielded essential insights in the structure and processes of the upper crust of the Earth. These boreholes are used as deep labs for long-term observations of processes in the Earth’s interior.

International Criterion - ICDP projects should be international in scope in order to choose the very best targets, to optimize scientific yields.

Need-for-Drilling Criterion - ICDP projects demonstrate that the necessary information is not otherwise obtainable than by drilling, or that they exploit the unique environment of the borehole.

Societal-Needs Criterion - ICDP projects (where appropriate) strive to collaborate with industry. Mostly projects have relevance to societal needs, such as energy and mineral resources and geological hazards, etc.

Depth-and-Cost Criterion - ICDP projects should attempt to be economic by minimizing unnecessary drilling depths and costs. Chosen drilling targets are often the best possible locations worldwide for the classes of phenomena being investigated.

The science plan of ICDP

Recently the new science plan of ICDP for the period of 2006 to 2011 was adopted with eight major research areas:

The results obtained are important to respond to topics of societal concern such as natural climate change and human influences on natural cycles and equilibriums, origin, prediction and monitoring of earthquakes and of volcanic eruptions, geothermic energy recovery, fluid mining and utilization of resources. For an overview of all worldwide ICDP projects please visit www.icdp-online.org .

The participation of German scientists from University and national research centres in the scientific program of ICDP is enabled in the framework of the German Priority Program ICDP (ICDP SPP 1006) of the DFG (German Research Foundation).

The tasks of the national ICDP office include the initiation and coordination of research projects, to liaise with several hundreds of members and stakeholders of the priority program, and to cooperate with related geoscientific programs such as ICDP International and ODP. Future tasks are to enhance the visibility of German research activities related to continental scientific drilling at the international level.

In past and ongoing projects German scientific groups took and take part in about 80% of all ICDP initiatives and were or are involved with major commitments as PI’s (Principal Investigator) in 20% of all ICDP ventures. A more detailed presentation of German drilling initiatives and projects may be found in the Highlights section. 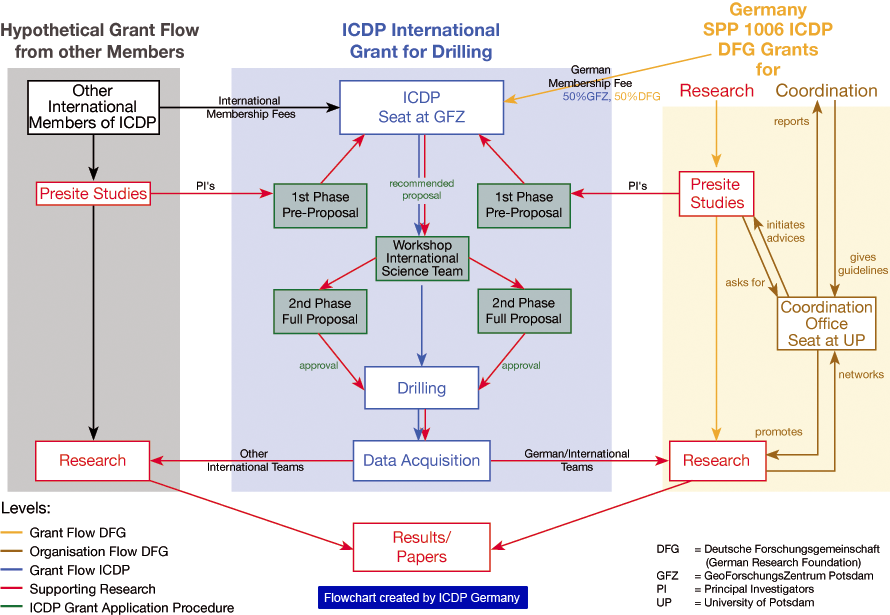 The counterpart program of drilling on continents (ICDP) is IODP, drilling of oceanic crust. The Integrated Ocean Drilling Program (IODP) is an international marine research drilling program dedicated to advance scientific understanding of the Earth by monitoring and sampling sub-seafloor environments.

As a matter of fact drilling in continental crust and drilling in oceanic crust requires very different organisational, administrative, financial and even management structures.

A drilling campaign on land has the possibility to rent drilling derricks, tools and instruments as much as needed (depending on the budget) for the length of time required within the scope of the requirements of the respective drilling project on the spot. The campaign also needs strong support from scientists and government members of the target drilling campaign country. Drilling on different continents means to observe varying national laws and interests (e.g. laws concerning environment protection and land conservation, licensing requirements and orders, internal and foreign policies).

Drilling at sea demands extensive organisational preparation and long-term funding because the ships and platforms are planned and constructed for special scientific needs and research projects. The ships have to be maintained and used to full capacity, in order to deploy man-power (sailors, technicians and scientists) reasonably and keep running infrastructure at optimal cost. Contrary to ICDP campaigns ship expeditions request to observe the law for international waters only.

Over the past few years ICDP and IODP developed strong ties und joint activities such as a jointly published journal called ”SCIENTIFIC DRILLING”.